15
The information about paper dixie cups has been introduced before. The history of the Dixie Cup is known to have begun in 1907 with the invention of the "health cup" by Lawrence, a Boston lawyer. By 1919, it was known as the Dixie Cup. Today I want to talk to you about the evolution of paper cups, starting with paper dixie cups. The Health Cup
Why was it called Health Cup at first? Because it wasn't healthy before. At that time, one of the social trends was prohibition of alcohol. Some people want people to stop drinking and drink water instead of beer or wine. So there was a drinking fountain, similar to today's drinking fountain, with one or two wooden or metal cups next to it. You want a drink of water, take a glass from this communal cup, drink it and put it back.
That doesn't sound healthy. But 100 years ago in the United States, most people didn't have a sense of hygiene. But one of the few people who did was Dr. Krupin, a member of America's National Council of Health and the founder of modern public health. The doctor once took a train and found that some of the passengers on the train had tuberculosis, but they were all using the same cup to get water from the water fountain as healthy passengers. When the doctor saw a healthy little girl trying to grab a cup to drink, he grabbed it and threw it out of the window. Soon after, Dr. Krupin, on behalf of the government, announced that the public drinking fountains and cups would be banned.
After the 1918 Spanish flu pandemic, drinking water from disposable paper cups became a deadly problem. As a result, governments in many parts of the United States have issued orders banning the use of public cups. So the Dixie Cup is riding the wave of the epidemic.

Continuous innovation
In fact, the Dixie Cup had trouble spreading until the 1918 Spanish flu pandemic. So Lawrence invented a water dispenser with a disposable paper cup. It was made up of three parts: a bucket on top, ice in the middle for filtration, and a waste water collector at the bottom. For a penny, you can use a disposable paper cup with a glass of water attached to it, which is very convenient. Dixie Cup sells the water dispensers to schools, offices, department stores and railroad companies, and makes a profit by selling and buying back the disposable cups. This style of play has also brought a lot of exposure to the Dixie Cup.
Many people use a water cooler in public places and decide to buy one for their home.
Beyond that, Lawrence Luellen and his partners have expanded the Dixie Cup by promoting the idea that disposable paper cups can also be used to hold ice cream. By the 1960s, the morning coffee craze was on the rise in the United States, and the Dixie Cup was a new product that helped coffee shops provide disposable coffee cups without compromising the original flavor. Thus, disposable paper cups began to be closely associated with coffee. It's a cultural thing in the United States. The most famous was the Anthora Cup.

Other inventions
Another problem was soon discovered, the safety of hot coffee against burns. The disadvantage of disposable paper cups is poor insulation. As a result of some coffee burn accidents, people began to think of ways to protect themselves. As early as 1933, someone submitted disposable paper cups with handles, but the reaction was not good. That's where Java Jacket comes in. Jay Sorensen invented The Java Jacket in 1991 as a solution to a common problem: scalding your hands on hot coffee. Subsequently, some manufacturers also offer cups with double or triple paper walls. Starbucks has taken a new tack on the cups, with a raised inside and a smooth outside. 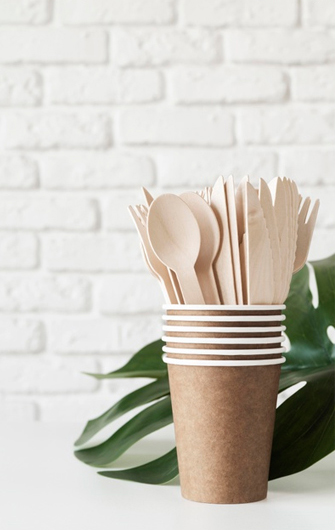 Ask us for
PRICE AND SOLUTIONS TODAY!
Your inquiry will be replied within 8 hours, and we respect your privacy.